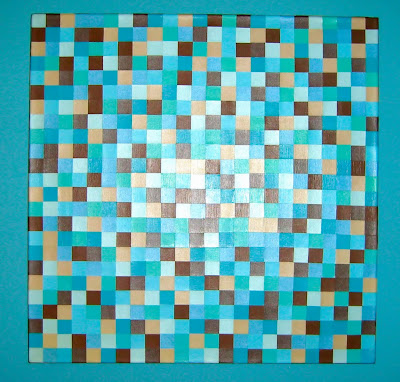 Sometime in June I picked up all the supplies and set to work. Well, let me start by telling you this is one hell of a project to take on. For days I sat at the dining room table (while watching late night Lifetime movies of course) gluing each little square on to the board. Like most projects, I quickly became bored of it and set it aside in the basement for months.

But alas there comes a time when you start another project that then fuels you to complete your unfinished projects. You see, Thanksgiving was nearing and we were expecting a house full of guests so that basement bedroom needed to get done. That meant either I finish the mosaic wall art or trash it. So I decided I can't throw anything away I might as well finish it.

The instructions posted on the link above are pretty straightforward. however, I did tweak them a little to fit my needs.

Step 1: Gather your supplies. I chose to use an artist's canvas because I found it easier and cheaper then going to the hardware store, having them cut a piece wood for me, painting it, and then having to rig framing hardware onto the board.  For this project I used:

Step 3: Start gluing! I tried using a glue stick at first, but that didn't work so I just ended up using Mod Podge. And because I'm a horrible blogger I didn't take any pictures. But I did sketch something up in paint for you. I essentially started at one corner and worked off that, like this: 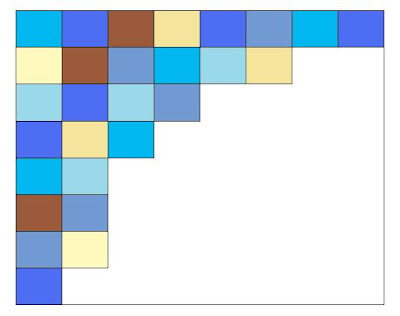 One problem I did encounter was that my cutting skills weren't 100% precise. Some squares were off by 1/1,000,000 of a millimeter (total exaggeration, of course) and that would throw off the straight edge that the squares create. So instead of just cutting new squares I would search all 576 squares (I didn't actually count the squares. I just did the math and yes, I actually do know how to do math) to find one that would fit next to the stupid square.


Step 4: Continue gluing until you have covered the entire face of the canvas. Now you want to cover the sides of your canvas that are still visible. To cover the frayed corners of the canvas I just folded a square in half and glued it over the 90degree corner.Then glued over it with another square to continue the pattern. 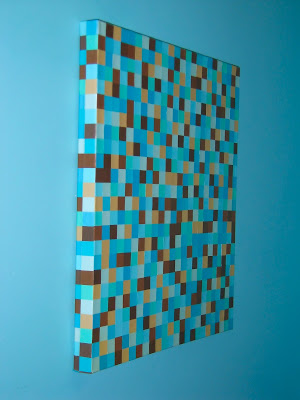 The sides of my canvas were actually 1-1/2" wide so instead of cutting the squares to fit I just glued them on and folded the excess over the edge of the canvas. I found this method made the lines look cleaner.

Step 5: Once all squares have been glued take the paint brush and slap on a layer of Mod Podge across the entire face and sides of the canvas. Let dry. 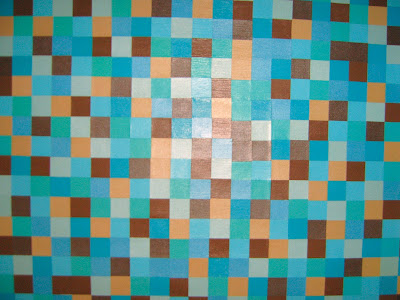 Right now it's just hanging on a bare wall, but if Craig and his List would stop trying to sell me crap dressers or extremely over priced dressers then I might be able to remedy the situation. Come on Craig, I'm counting on you!

Gaby
Two nerdy-twenty-something year old's are the proud homeowners of what was and might still be an outdated-thirty-something year old townhouse. Here we are with little skill and lots of dangerous tools to document the trials and tribulations of home ownership.